Caught in diplomatic tensions and a stroke of luck.

A few days after arriving in Tel Aviv we bussed down to Eilat, the southernmost point of Israel that borders Egypt and Jordan on the Red Sea. Ilana had some family living there which we had a great time staying with before heading to the Jordan border the next morning. At the crossing we showed our passports, having used my Israeli passport to enter Israel I instinctively used that passport not knowing it would lead to me being denied entry.

I was basically told that in the past year diplomatic relations became a bit worse. I've not verified this but was told that on a few occaisions Israeli tourists had died hiking in canyons and that the Israeli government caused Jordan some trouble in response. I've no idea what that means but essentially if at the time I was there if an Israeli wanted to go to Jordan they had to hire a government accredited tour guide. Ilana was fine to enter, but I was not.

It was a huge bummer to get turned away, and we called Nir and Adva(Ilana's family in Eilat) to see if they had any advice. Nir had a friend, Elad, who did a lot of climbing in Jordan. Elad sounded pretty upset when he heard we were turned away. Turns out he has been climbing there since the early days of traditional and bolt climbing development in Rum(Bedouins have been climbing there for long before). He was pretty upset at the new border rules and told us it was a pretty recent change and that it had really been hurting the businesses of the climbing community in Rum.

He made a call and told us to head back to the border where we would hear from his friend Muhammad. At the border the guards were reluctant to let us through, they wanted to search us and were asking for all sorts of documents but Muhammad showed up, literally grabbed us from the guards, argued with them for a few minutes, then we were on our way to Rum!

Message at the border and some mountains on our way to town.

We had been messaging someone named Muhammad on whatsapp who ran a sort of homestay for climbers. We asked to be taken to Muhammad's and drove the hour or so from the border to Muhammad''s. Later that night I got a message from Muhammad asking where we were, this was the moment we learned that most men are named Muhammad here.

Beautiful views from his house.

Muhammad recommended Goldfinger as a good intro climb for our level. We had a great time on it and was a good intro to climbing here on this rock and in this environment. 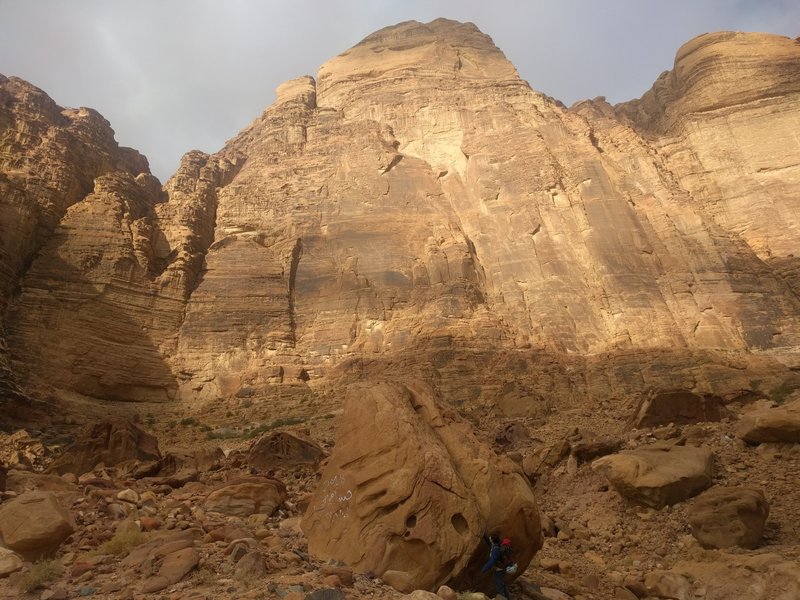 The hike up to the wall.

Looking up at the finger from the base

Up on the route

At Index(my local crag), you have the train. The train goes by, its super loud, shakes the ground, and when you are cruxing out it can add some extra spice to the ordeal. Here we had the daily prayers. Five times a day, like in many Muslim nations, the community gathers for prayer at the mosque. The prayers are broadcast over megaphone and echo throughout the desert and valleys. The prayers are sung in a beautiful way and calm the nerves when things are getting spooky. I recall a few occasions, being on lead, getting far above my pro on potentially unstable rock, with not much in sight then all of a sudden this calming sound would echo through the valley, the feeling of these moments is indescribable.

The only bolted rappel of our trip. On the way down we toproped a cool looking corner(right image)

At the top of the finger

The Beauty was one of the first routes we heard about when we arrived. When we got back from our first day we meet Erik Weihenmayer and Timmy O'Neill, two pro climbers. Erik is blind and has some remarkable climbs under his belt, many which most skilled climbers will never do. They had just returned from climbing the Beauty, heard we were thinking of doing it and told us we definitely should. The approach sounded a bit complicated but Timmy drew us a map(see below). His directions started with walk along the cliff, when you hear a dog barking walk towards the cliff and into the canyon. At some point we would see a runway, Timmy sounded quite proud of the runway then we would walk in that direction up some small cliffs and through some canyons.

Guidebook info on the route

Cozy in Muhammad guest room and Timmy's info on the route, dog barking, runway, then ?

Leaving town in the morning

The dog barked and we proceeded into the cliff/canyons

We found the runway!

Starting to get a bit lost, we went into one canyon, then another, up and over crazy rock ridgelines dropping into other slot canyons. We knew how ot get out, but had no idea where to go to find the climb.

Pretty wild traverse into another canyon, deep inside the cliff at this point 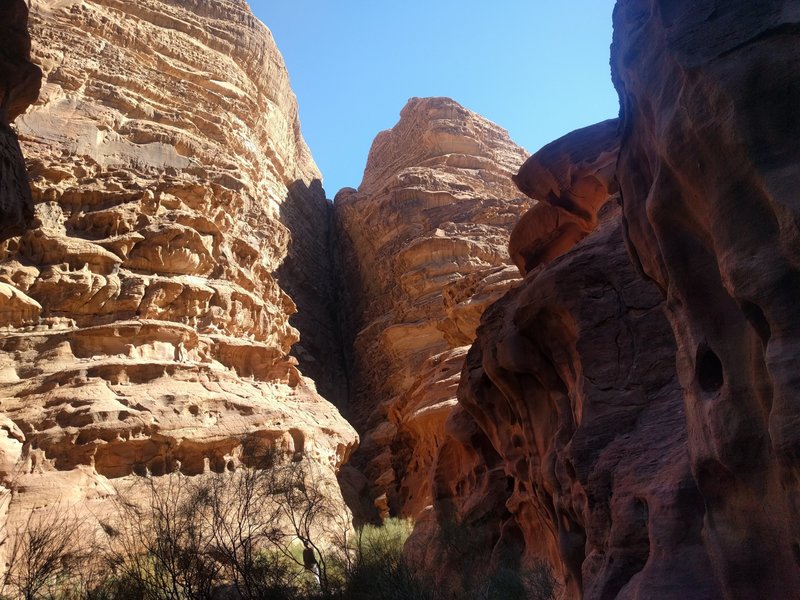 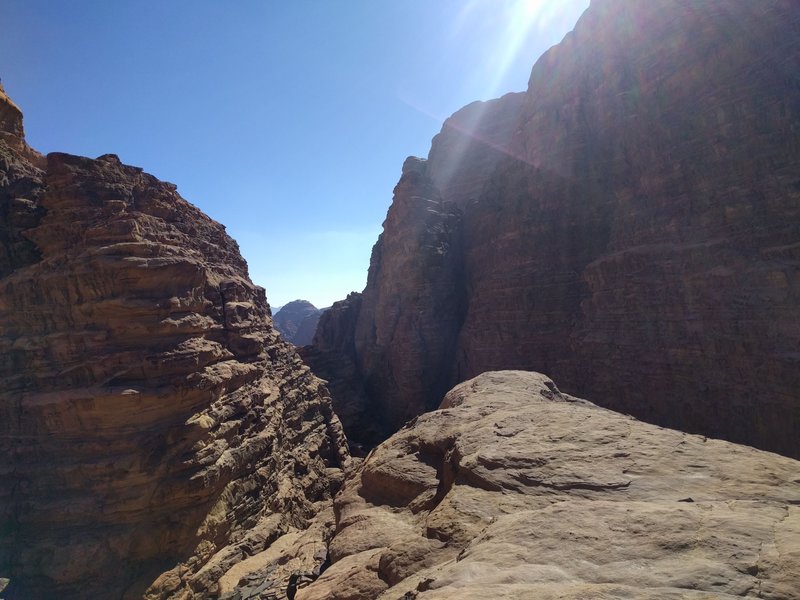 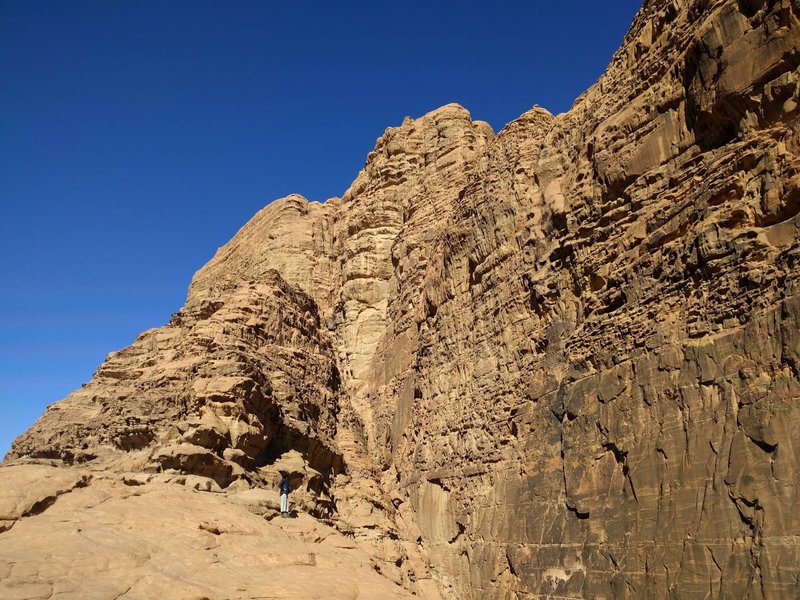 Exploring the endlessness of this place 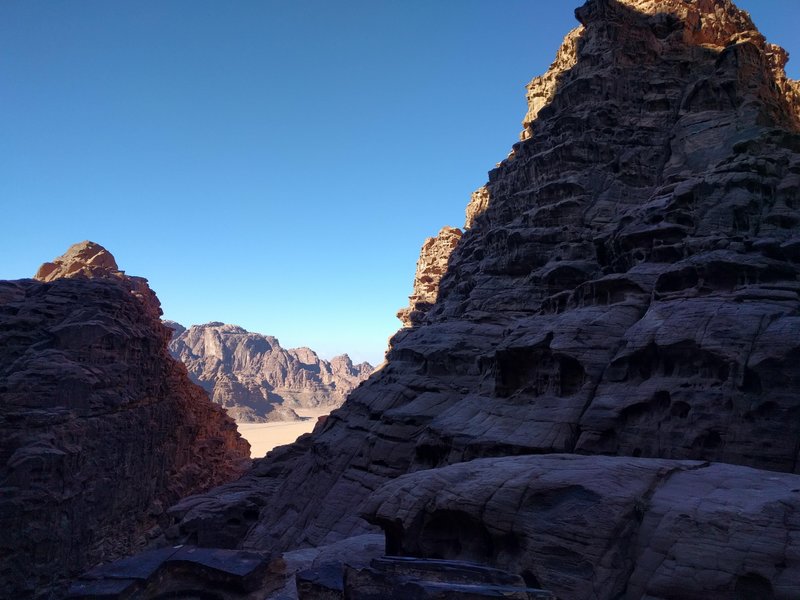 We got so far in that we could see out the other side into the desert.

A pretty botched panorma deep in the canyons, such a wild place to be.

Time to start heading back to town

Back in sight of town

We think we may have seen The Beauty(left picture), but somehow supposed to traverse in from the right and on rappel we could come down this left canyon. We were all over the right side, up and down all sorts of canyons and were never able to find a way up there.

In the end we never found the climb, but we didn't really care. It was a wild adventure, some of the canyon scrambling was pretty sketch. Knowing that Erik had done a similar approach to our adventure, then also climbed was astonishing.

By the time we reached the route we had no idea where we were or how we had gotten there. The cab driver was going to leave us and asked when to return. Our lives were fully in his hands, there was no getting out of there on our own so as he was leaving I asked if he had a lighter we could borrow just in case. The desert nights in late december are very cold and a lighter could mean survival if the driver didn't return for some reason. 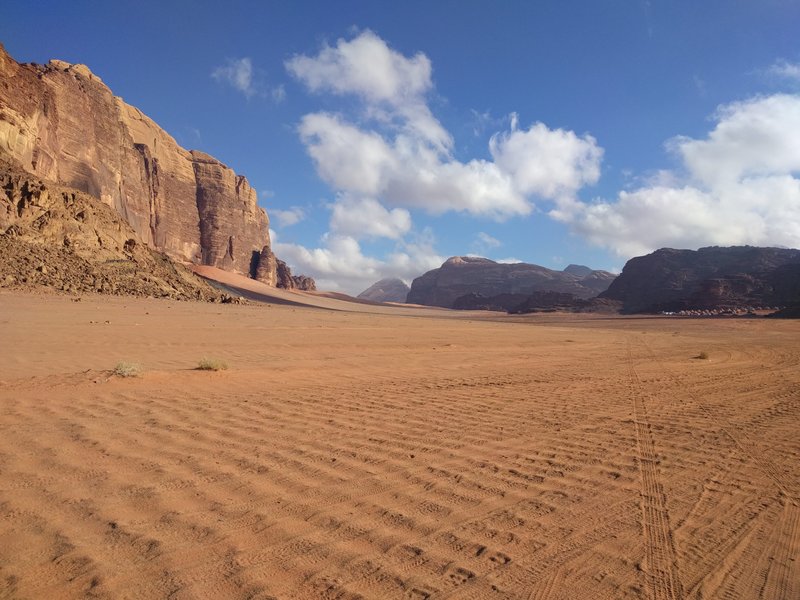 Some 'Snappling'. At the border there was a sign saying No Snappling. Apparently this mean rappelling.

Not my favorite anchor, but definitely one of the better ones we saw. One ok looking sandy tufa, and one piton hammered into the rock at a slight angle. Bomber but if your used to granite like I am, definitely a bit frightening. 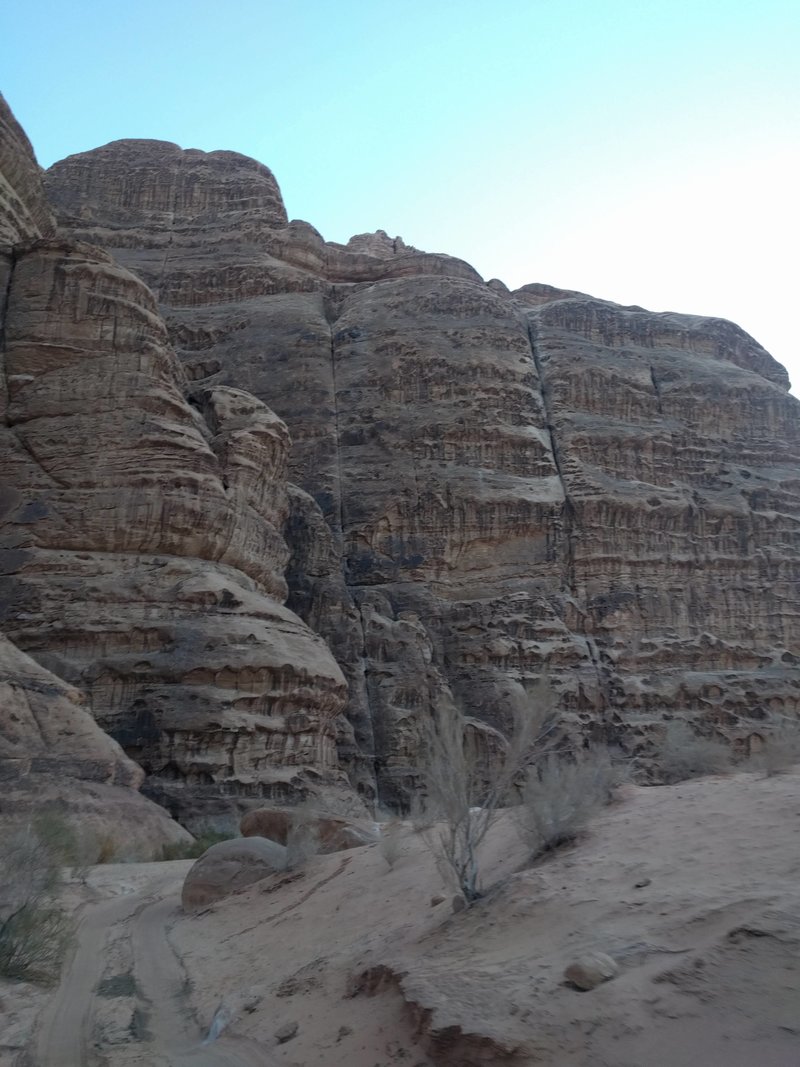 A look back at the route, long crack on the left that ends in a little dish area.

The driver did come back as we were coming down the last rappel. 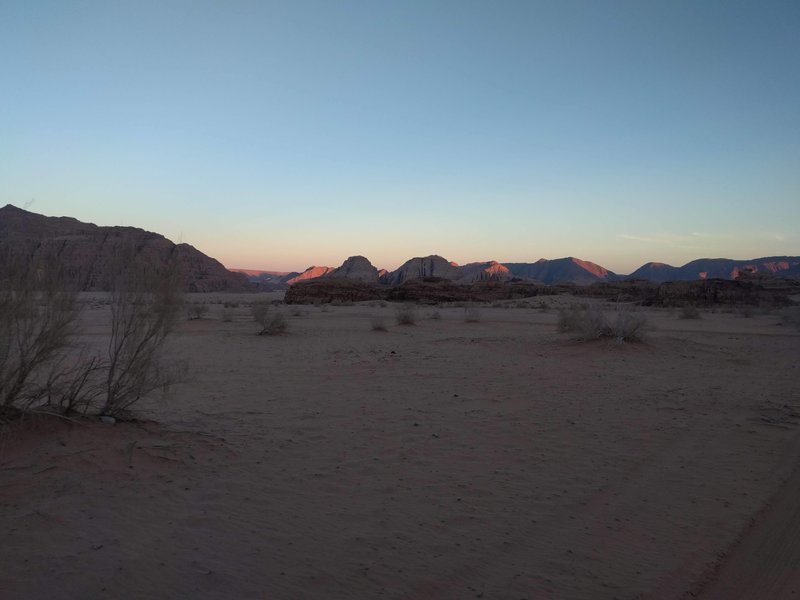 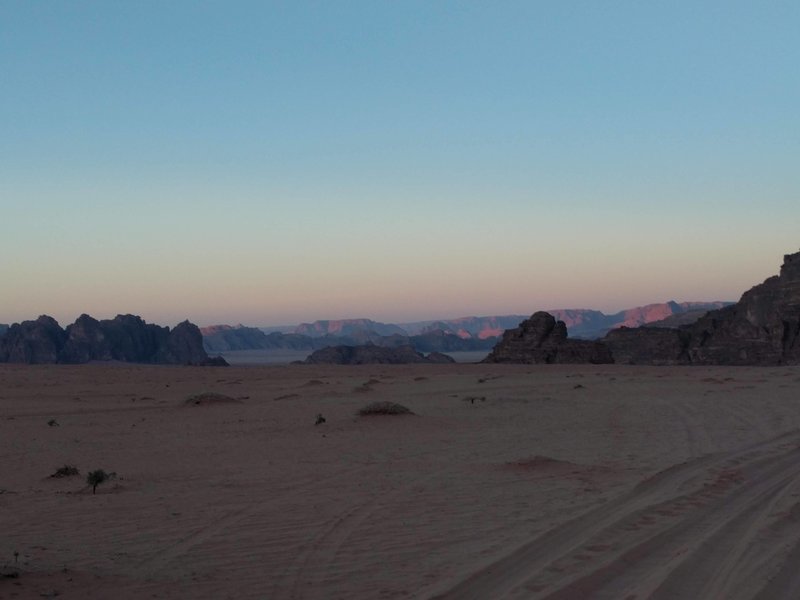 Beautiful sunset on the way back to town.

Some guidebook info on the route 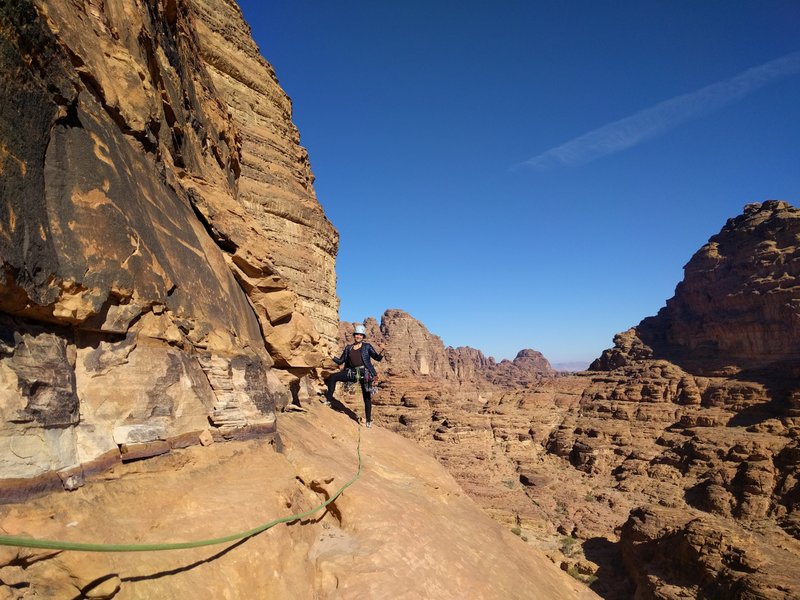 Ilana leading the traverse and then up the face. Bold lead, wasn't hard but the face is steep and there is no gear in sight from below.

Getting cold and a bit spooked by some of the anchors. It was getting towards the later end of the day so we decided to head down a pitch or two from the top as we had quickly become familiar with how involved the descents here can be. 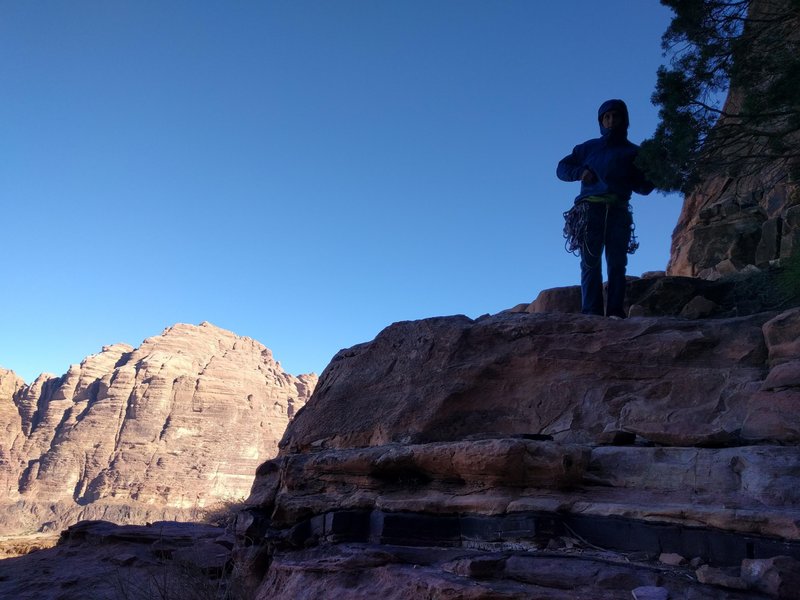 Descending from the tree down the massive slab and into the canyon. Our ropes got extremely stuck from just friction on the slabs so I had to climb back up and do some shinanigans to make things work.

Supposedly getting down this was a scramble on a bedhuin route but we had to do two rappels on this section as though the down climbing may be 4th-low 5th class, it was super exposed at times. Bedhuin climbers are the real deal. 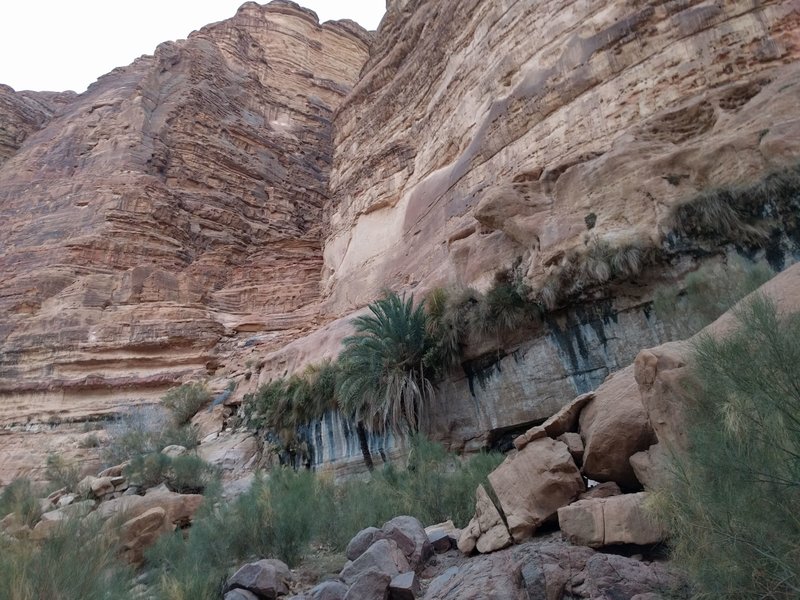 Little oasis when we reached the bottom of the canyon, we then hiked out and back to town.