We left Seattle the night before planning on waking up and climbing this route that my partner Cooper had suggested we check out. On the drive out(7/29) we saw an incredible meteorite(we think). It was massive, moving with a tramendous speed, and seemingly only a few miles away. It was bright green and surprisingly large, lighting up the sky for a split second before dissapearing behind the treeline. It may have been a meteor, but Cooper and I came to the conclusion that more likely than not it was an Alien spaceship.

The next morning we woke up around 7, took out time getting ready, and drank some three cups of coffee while chatting with some hikers at the trailhead. The peak we were going to be climbing could be seen clearly from the trailhead and we did not feel like there was much of a rush to get started. The topo was quite vague, and although there were instruction on getting to the route, just from looking at the wall we could not figure out exactly where the route started and went. 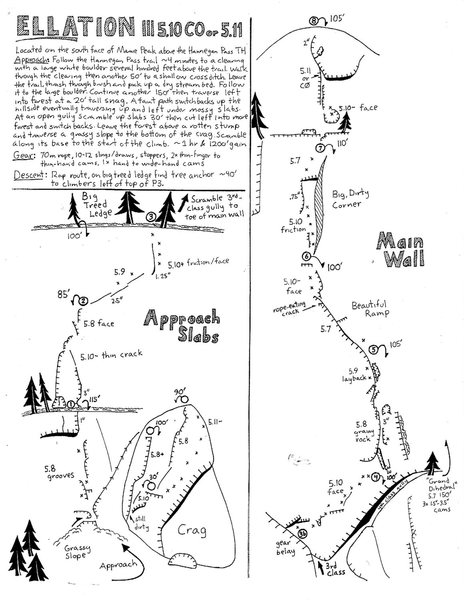 Topo and some images of early approach. The 3rd and 4th images are where you leave the trail and head up the hill.

We followed the topo:

4 minutes down the main trail, look for a big boulder a few hundred feet up the hill, and follow a streambed up to the big boulder

It took us a bit to figure out where to take the turn of the main trail, but we found the right path. Note to others looking to do this, the path is not really a path, nor is it really even a climbers trail. Grass is tall around the streambed and it is quite difficult to stay on the correct route. That said as long as you find the correct turning point, you should easily reach the boulder up the hill. Looking down from above the ‘Big white boulder’ 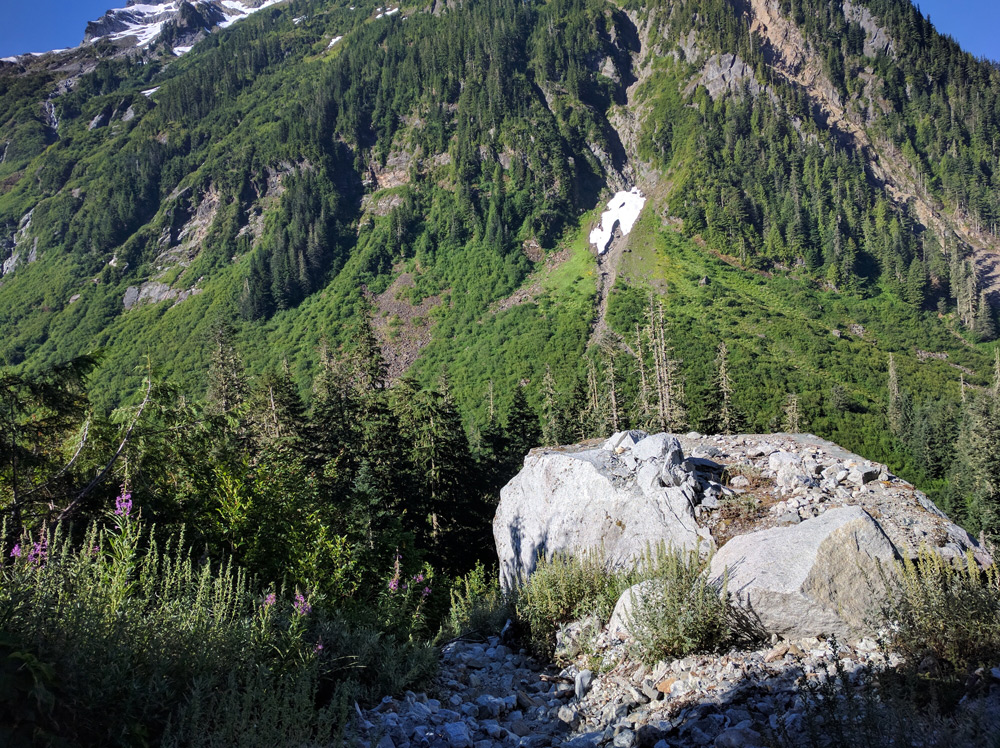 The 'big white boulder' and the trail when cutting into the trees.

We arrived at the boulder and continued following the approach description, 30’ up the hill, and then cutting left into more forest at a 20’ tall snag. The trail cutting left into the forest(which I’m pretty sure we were on), is basically bushwhacking through thick alder on a bear trail. After 50’ of cutting left, unable to see anything through the thick alder, you come out at the base of a pretty steep forest hill. From here we switchbacked up the hill and this is where it all started to go wrong.

We saw some mossy slabs as the description suggests, and cut left about 30’ down hill from them. We kept cutting up and left for about 5 minutes before reaching a dry streambed under a pretty 4th class looking gully. This must be the gully we thought, as if there couldnt be multiple gullies, and we began our scramble. Pretty quickly we realized there were some low 5th class moves on dirty, rotten, mossy rock, and knew we were not on the correct approach. At the top of this gully we took a left and switchbacked for a while up some woods before reaching a dense alder thick. We bushwacked up a riverbed through this, it was exhausting, and probably took us 30 minutes or so, but we eventually reached the base of the mountain. With no Ellation crag in sight we dropped the bags, and split up, with Cooper traversing left along the base to look for the route and me right. It is very steep around the base and there are no trails, so it was quite difficult getting around, but eventually we realized we were about 300 feet up and left of the area we needed to be. We downscrambled a steep gullie with lots of skree, and cut over to the base of the route. It was a brutal aproach, and definitely pretty scary, but at around 11am(3 hours later), we had reached the base of Ellation. 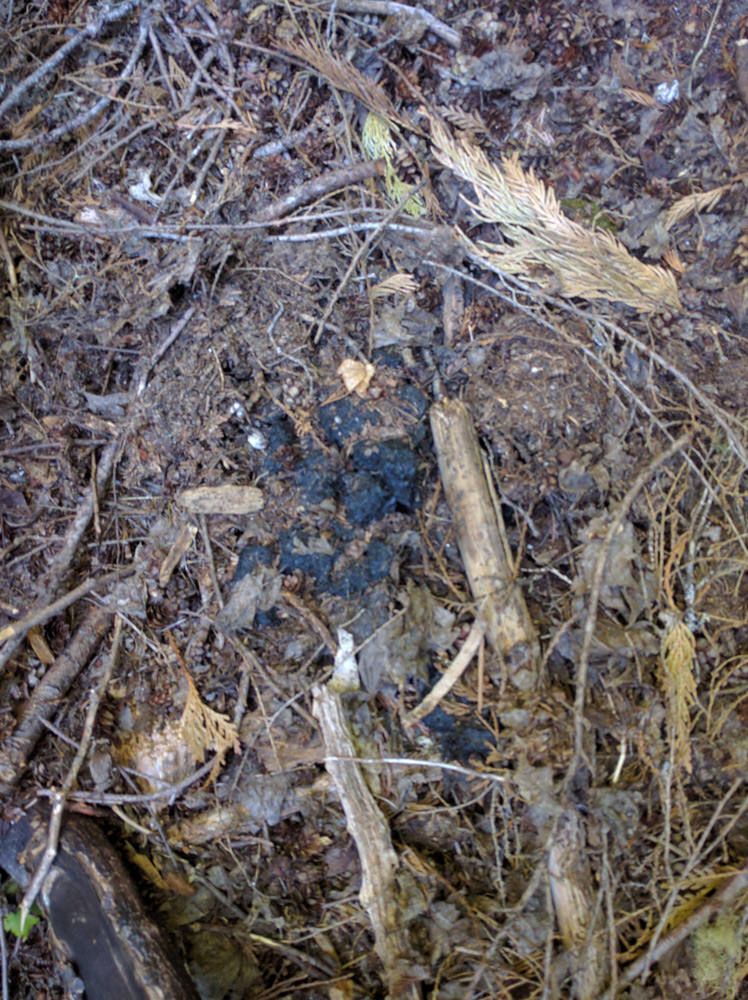 Some findings.
Finally at the base.

What you should do

When going up the switchbacks don’t stray too far left. There is a “trail”, and if you take your time and move carefull you will be able to stay on track. The topo says when you reach a mossy slab to cut left and up a gully. Make sure you literally are at the base of the slab when you begin to cut left. When cutting left you will be walking up a slight hill with a pretty well defined trail along the base of the mossy slab. When you reach the gully its a short scrambe and then cut left again into more woods. Switchbacking up these woods and cutting out right once your about 50-100’ from the base of the mountain should bring you right to the Ellation Crag area where the route can be easily identified by a bolt near the ground.

IF YOU DO THE APPROACH CORRECTLY THERE SHOULD BE NO SKETCHY SCRAMBLING INVOLVED - it is very direct and safe, just quite steep and hard to follow at times. 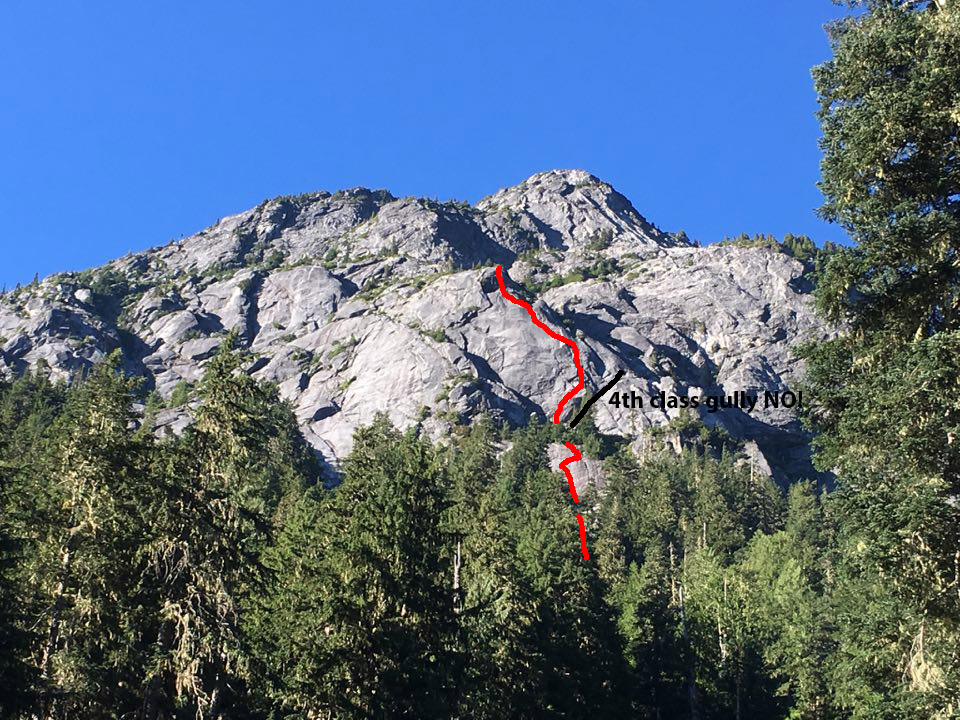 Where to go, and where not to go.

Cooper lead the first pitch, putting us on a very large tree ledge. From there I led p2 which started quite easy but ramped up in difficulty in the middle section where there was a 10- little crack. I think I got a bomber .3 in and a meh .1 up higher, pulled a big move and got to easier and chossy terrain. The climbing to the anchor from here was easy but the rock quality was quite poor so it was a bit run out. Cooper headed up on pitch three which is really cool looking, you traverse up and right along a fault in the rock, getting some gear and 2 bolts along the way. The last traverse move is a wild and quite awesome sideways 5.10 slab move well protected by a bolt. From there a few difficult slab moves(well protected and also french-freeable) brought us to another large tree ledge below the buttress.

The topo depicts a 4th class gully heading up and right that looks like it re-connects with the route. As we had spent all morning getting lost we figured it would save some time to skip pitch 4, scramble up the gully, and re-connect with the route. We soloed up the gully, it was loose, big blocks were coming off, and it was definitely quite difficult and scary. At the top we quickly realized the bolted line on the face was not accessible from where we were and that we would need to go back down to the big ledge atop pitch 3. We were both pretty shaken up from the scary climb up, we opted to rap off a sling/biner(in really good shape), that someone had left on a tree right above the gully. The rap was scary, I first lowered Cooper so he could walk around the corner to get out of the way of falling rocks as I came down. A stressful hour or so later we were at the base of the upper wall, feeling scared, but definitely not ready to bail yet. It was about 2pm at this point. 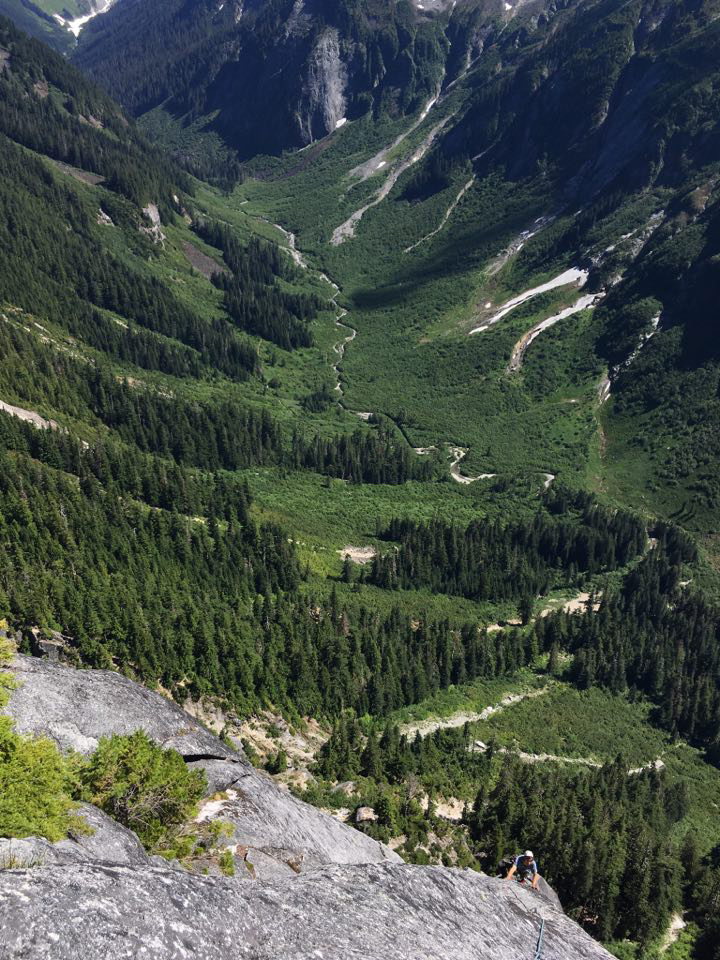 A stellar mostly-bolted pitch brought us up above the gully. There were some hard moves which I pulled through as I was really in my head after getting really scared in the 4th class gully. Cooper lead the fifth pitch, really dirty and rotten, one or two bolts, decent gear, but some fridge sized hollow blocks everywhere. I got up to Cooper, looked up at the sixth pitch, and realized it was time to get my head back in the game. A low angle corner ramp jets off to the left. No crack in the corner, just a seam. From the anchor I could see a bolt about 20 feet up the corner from the belay but that was it. I left the anchor, pretty quickly got to the bolt. Looking up further the corner still looked like a seam, no crack for gear, and no more bolts for over 60 feet. Blindly trusting that the FA team wasn’t leading us into a death trap I continued up the ramp, 10 feet still nothing, 15 feet still nothing. Feet smeared in the corner, no rest spots to stand on, I just had to keep going. About 20 feet past the first bolt a little pocket appeared, tucked under a bulge. WHOOO! Placed a bomber small piece and continued up. A few more small hidden cracks appeared and pretty soon I was at the end of the corner clipping a bolt under the last 20 foot vertical stretch. From here there were two or three bolts to the anchor. Some really fun 5.10 face climbing that was fairly well protected brought me to the anchor. 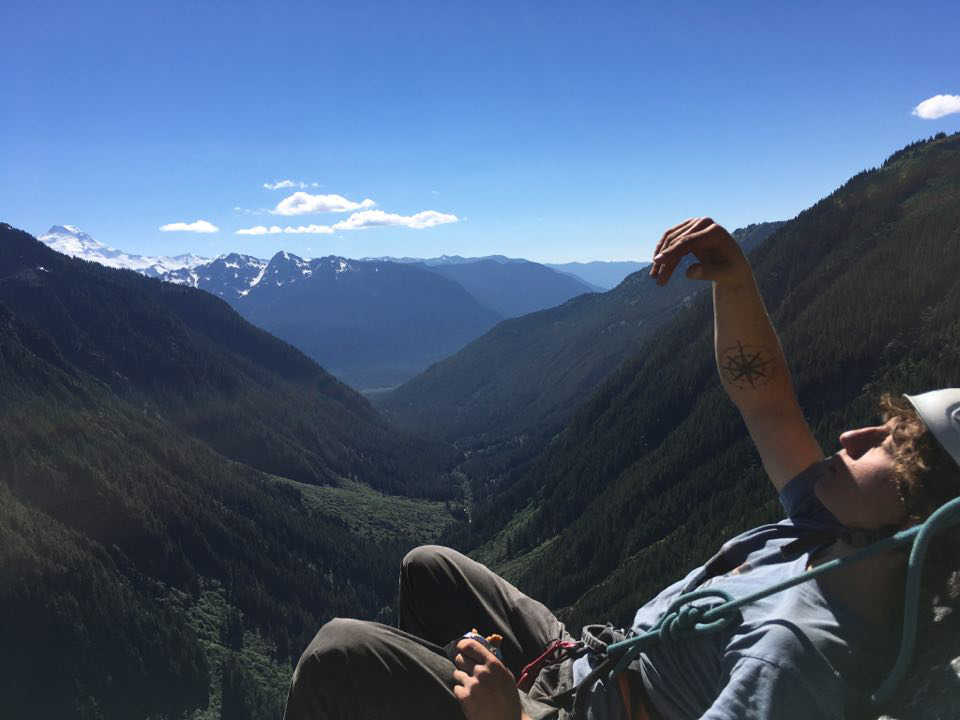 Cooper lead pitch 7 which was bolted for the first half, then quite run out but easy and solid rock to the anchor. Pitch 7 was definitely one of the better ones, really fun movement, and super well bolted. I then lead the final pitch, 8, which is wild and quite different from anything else on the route. A boulder move 10 feet above the anchor semi-terrifying looking undercling flake, bring you to the first bolt. From there some easier climbing into the upper corner. The corner quickly turns into 11- terrain(easy to pull on gear through here), and up to an easier low angle .75 crack for 15 feet. From here it was easy scrambling to the top! 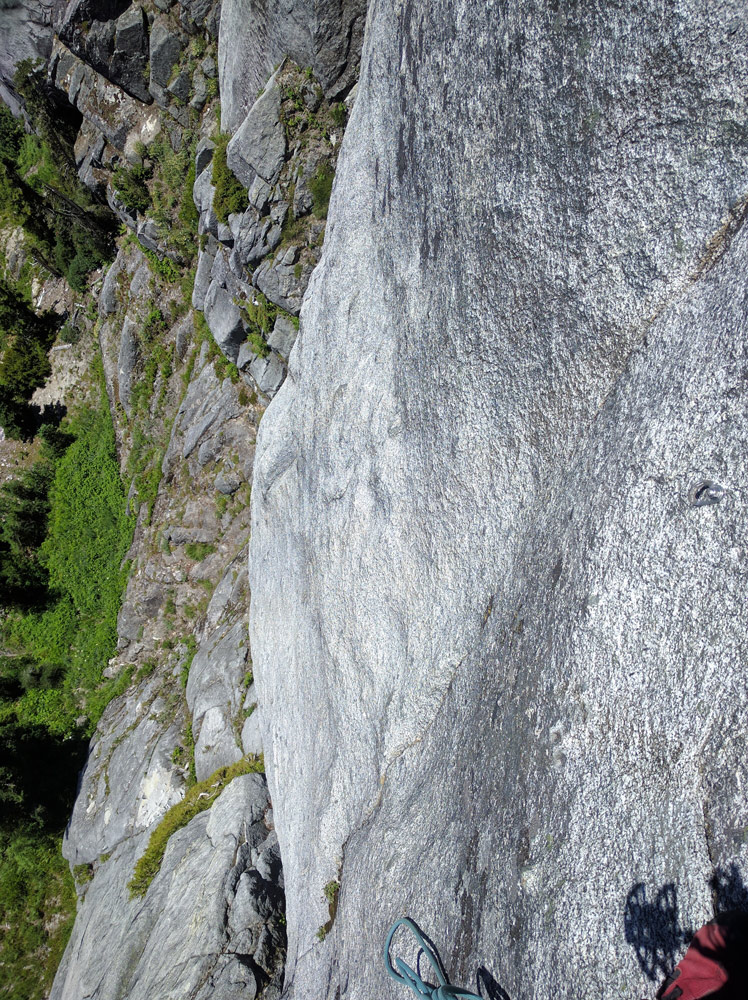 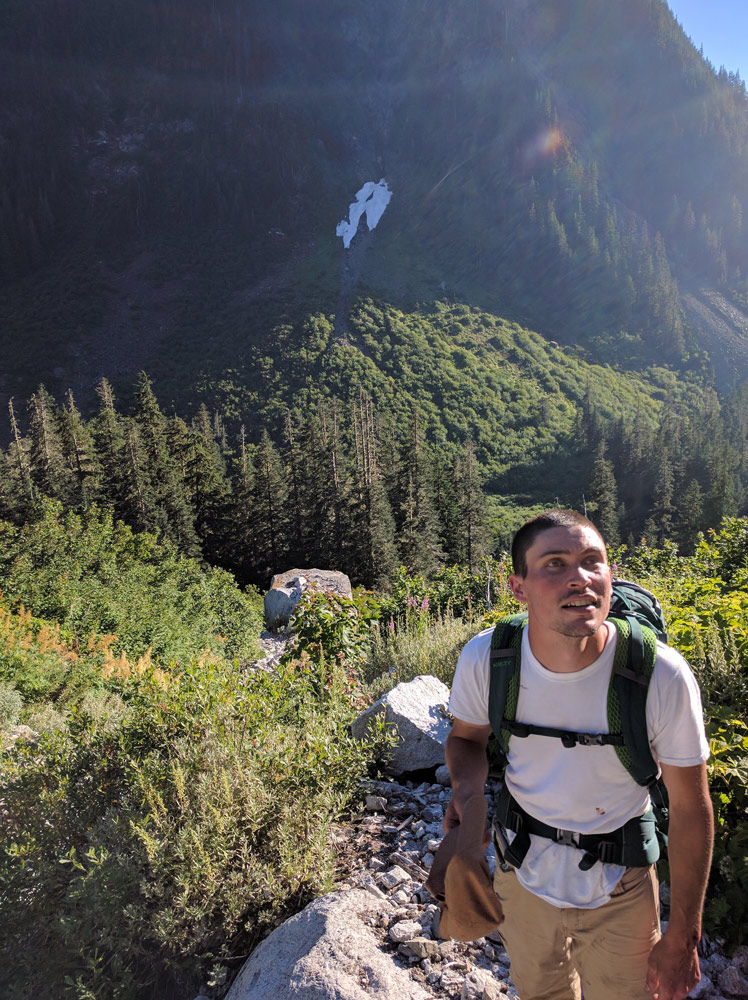 Getting down was MUCH MUCH easier than getting up. The rap route was really easy to follow. Some of the raps are long so make sure to tie knots! A tree on the large ledge above p3 can be rapped and is found 40 feet to the climbers left of the top of pitch 3.

From there finding the “trail” that we missed on the way up was really easy and we were down at our cars by 6.

We were looking for an adventure and we definitely found one. It was awesome to get away from the crowds and have a whole mountain to ourselves. Some of the climbing was awesome, some was not so good, but overall we had a great day. Expect 1.5 - 3 hours for the approach and 1 hour for the descent. There were a ton of flies that like to swarm and bite, bug spray would have been amazing to have. All the anchors are bolted and all the bolts are in really good condition. Thanks a lot Darin & Matt for hiking up that hill with a drill and making this a fun and safe adventure!